Traumatic births and colic: What’s the connection? Part 1 of 2 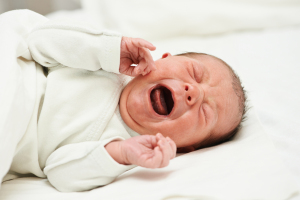 In the November 28, 2012 issue of the Journal of Pediatric, Maternal & Family Health, Dr. Ron Castellucci documents the case of an eight week old infant suffering from colic after a traumatic birth. And how this baby's parents were able to get to the cause of the problem and get rid of the colic forever.

Infant colic is characterized by episodes of inconsolable crying in a baby for which no apparent reason can be found. According to the University of Maryland Medical Center infantile colic is suspected if the baby exhibits the following:

An 8 week old female patient presented with symptoms of colic which included crying for up to five hours. The crying often started at 10 am and would last well into the night, which persisted for 7 weeks prior to the first adjustment.

The patient was unable to sleep or breastfeed due to the crying. The patient also exhibited signs of pain with bowel movements which is described as high pitched crying and wincing.

Often the patient would awaken during the night crying and in obvious distress or was unable to fall asleep. The patient also had diarrhea which was accompanied with screaming and crying. The patient was prescribed Hyoscyamine (marketed under the trade name Levsin) which is used to control symptoms associated with disorders of the gastrointestinal (GI) tract.

Prior to birth, the patient and her mother were in distress after 18 hours of labor and were transported to the emergency room where the mother was given ptocin to induce labor and an epidural for the pain. Other drugs prescribed in the ER were for nausea and migraine. The patient eventually delivered via cesarean section because the baby failed to turn and engage in the birth canal.

On this visit the patient was sleeping and there were no signs of distress. The parents reported the following:

“after her first visit, she slept the entire night. She did not have the crying spells and we reduced the medication to once per day. After two weeks of chiropractic care the parents reported the following “she (the patient) no longer takes her medication. She is now a happy baby. She eats, sleeps and has regular bowel movements with no pain. For the first time since she was born, she slept through the night.”

In the next blog post we will look at other research showing the difference chiropractic makes in the health of babies with colic.
To find a Doctor in your area go to www.NUCCA.org or if you are in the Redwood City California area to schedule your NUCCA evaluation, click the button below: