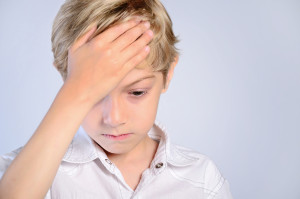 In this blog we'll look at a couple of case studies of children who suffered traumatic brain injuries or mild spinal cord injuries published by upper cervical chiropractor Dr. Erin Elster. The first case study she reported is of an eight year old boy who hit his head when he fell on a school playground. We'll then look at a six year old boy who sustained an injury from a television falling off of a cabinet and hitting him on the head.

In Elster's first study, she reported that the arms and legs of the boy who fell on the school playground tingled, and he was diagnosed with a spinal cord injury. This led to loss of bowel control, which lasted for the next six months until his mother brought him in to Dr. Elster for an examination of his upper neck vertebrae.

During a digital infrared imaging and radiographic diagnostic, it was determined that he had sustained an injury to the upper neck. The severity of the impact of the fall most likely caused the displacement of his skull from his upper neck. This most likely led to the spinal cord injury, which then led to the injury to his bowels. His initial adjustment restored his bowels to normal activity.

In the case study of the boy who sustained the impact of the television that fell, he was lying on the floor when it fell on him. It fell on his face causing multiple fractures around his eye. Multiple reconstructive surgeries to his eye socket and sinuses followed this diagnoses.

After his surgeries and the fractures healed, his mother noticed behavioral changes in her son. He also suffered from double vision and continuous headaches. They consulted with numerous physicians and neurologists, all of whom determined the injuries were permanent and there was nothing they could do to reverse them.

Though, an examination by Dr. Elster revealed that the boy had sustained an upper neck injury, which was most likely due to the accident he suffered months earlier. It only took a few weeks of care before the double vision and headaches were completely gone.

Both of these case studies reveal that whether your child is playing with friends or just sitting and watching television, there is always that chance of them sustaining and injury to their upper neck. We know you want your kid to be able to be a kid, and we want your kid to be a kid. But it's difficult to be a kid when you suffer from health related issues that can be easily resolved by correcting any misalignments in your upper neck.