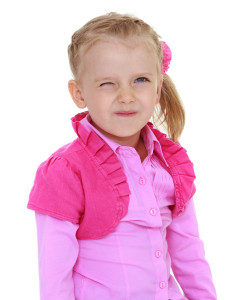 Tics are defined as sudden repetitive motions or vocalizations, non-rhythmic movements or sounds that are produced by an individual, which serves no true purpose.

Tics are classified by their quality and complexity.  Almost any movement, sound, or combination of both that the body can produce has the ability to become a tic. There are two types of tics reported in the literature: motor tics and vocal tics.

The onset of a tic(s) typically occurs between the ages of 3 and 8 years old, and 93% of patients are symptomatic by the age of 10.

There are many reasons why a child may suffer with tics. Head and neck trauma during the birth process or in the first years of life can lead to brainstem dysfunction and neurological manifestations such as vocal and motor tics.

That was the case with a 7-year-old girl described in the case study. She had been suffering with motor tics for more than 2 years. She also had a history of torticollis, and was currently suffering with neck pain as a result of the constant motor tics, which would cause one of her shoulders to raise and her neck to move about every 30 seconds!

There have been a number of studies that have shown positive effects of upper cervical chiropractic care for the treatment and resolution of neurological tics.

A study by McReynolds describes a patient complaining of a “tickle” in his throat causing him to clear his throat. The patient reported that the “tickle” occurred a couple of times per day up to several times per hour. He also had observed head jerking, grunting and eye blinking. The patient received upper cervical chiropractic care and later experienced a complete resolution of his neurological tics.

Stone-McCoy and Muhlenkamp discussed a reduction of motor and vocal tics in a patient that was diagnosed with Tourette syndrome. The patient was seen for a total of 32 visits in one year, in which she had decreased frequency and severity of her tics.

Alcantara et al also reported on a 6-year-old girl presenting with motor tics. The patient had compulsive eye blinking and eye rolling in multiple directions.  After a total of 10 visits, the patient’s tics were completely resolved.

Motor and verbal tic disorders can have devastating physical and psychological effects on the entire family. Several research studies have shown the effectiveness of upper cervical chiropractic care in getting to the underlying cause of these problems.

It’s time to see if your child can be helped! Just click the button below to get started.