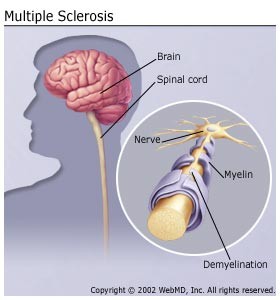 Last week, we explored the commonalities between migraines and multiple sclerosis by looking at research conducted by Dr. Raymond Damadian. We understand that you might be thinking that while one is a debilitating but temporary condition, the other is one that affects a person's entire body.

Well, think of it this way, if there are two earthquakes in the same area, and the first one is a 3.0 and the second is a 6.0, you have to assume the same fault line is most likely the source of both earthquakes. The fact that migraines are temporary and multiple sclerosis is a much more severe condition is irrelevant, but what is relevant is that they're both neurological disorders.

Still not convinced? Let's take a look at another case study....

For those who might still be skeptical of the connection between MS and Migraines, the Upper Cervical Research Foundation (UCRF) conducted some research with MRI machine. They also published a paper on their findings called “Changes in Cerebral Blood Flow Patterns and Velocities of Migraine Subjects Following an Atlas Correction.” The reported the following:

"Results of a case study describing a subject diagnosed with migraine headache (without aura) reveal compelling results.  The subject was evaluated using the protocol of the National Upper Cervical Chiropractic Association (upper cervical) to determine the presence of an Atlas misalignment. After Atlas correction, a follow-up PC MR Study demonstrated changes in cerebral venous outflow. A change in vessel outflow pattern from a jugular to the paravertebral plexus route was discerned. Venous flow rate and vessel pulsatility decreased as well as cerebrospinal flow rate across the Atlas (C-1) vertebra. Most significantly, the imaging procedure measured a distinct decrease in intracranial compliance. The subject obtained relief from migraine headache pain consistent to maintenance of his Atlas correction by the end of thirty days. The PC MR exam continued to show improvement of the hemodynamic parameters measured over the 16-week study period consistent to maintenance of Atlas alignment."

In layman's terms, the cause of the problem can frequently be fixed by using a specific and gentle form of chiropractic called upper cervical chiropractic. When misalignments are corrected in the upper neck it begins to alleviate pressure on the brainstem by one or both of those top two bones in the vertebrae pressing irritating it. That will lead to the ability of vital fluids, such as cerebrospinal fluid and cerebral blood, to flow to and from the brain without hindrance.